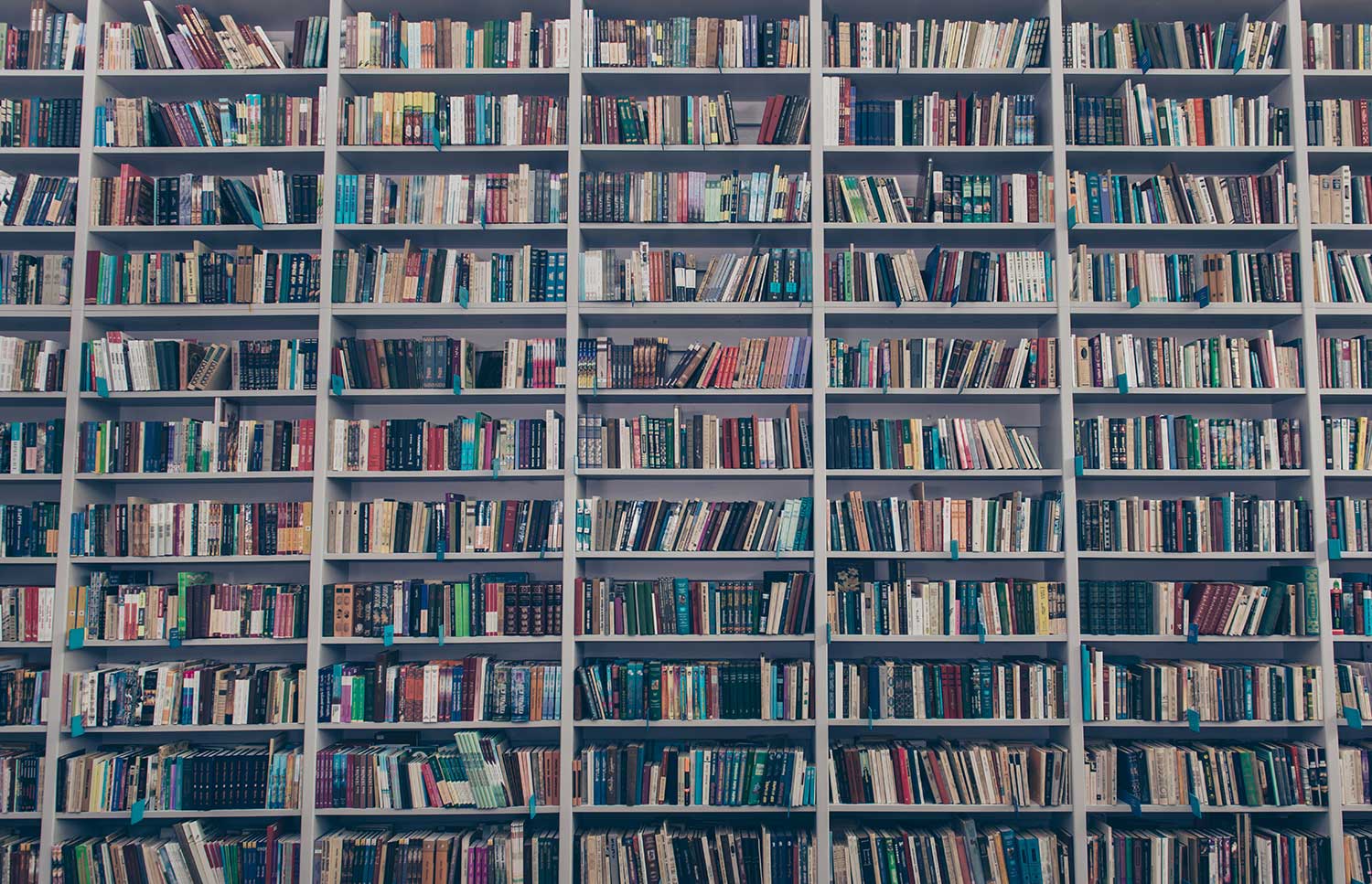 Pam’s books and live performances. Links are available to help you find where to buy them. 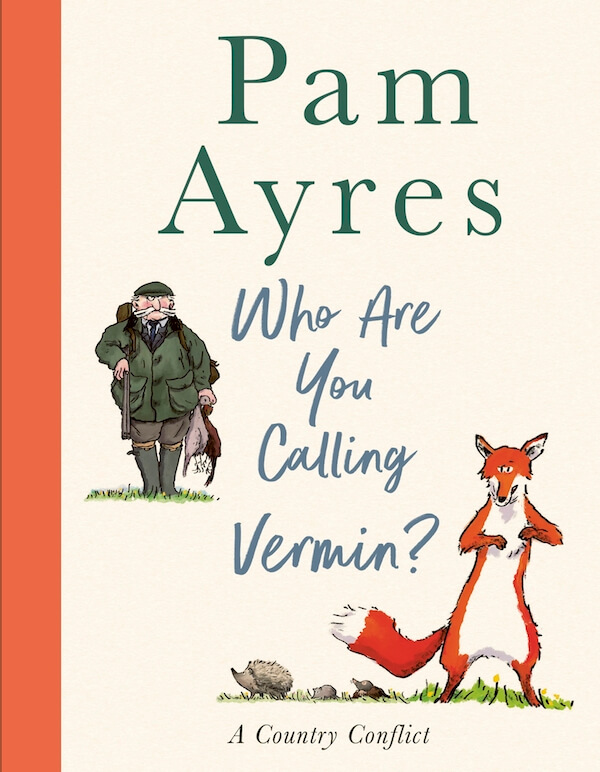 Who Are You Calling Vermin?

Published by Ebury Spotlight on 8th September 2021 in Hardback

Hidden beyond the bluebell woods and babbling brooks, there is great unrest in our
countryside. In this lyrical satire, Pam Ayres, a country dweller all her life, highlights the
undercurrents simmering beyond the patchwork of fields. We meet the angry fishermen who
can’t afford to live in their own villages, the indignant farmers who get the blame for
everything and the old man grieving for the unspoilt village of his youth. The animals have
their say too, from the persecuted grey squirrel who didn’t want to leave America anyway,
the barn owl mourning his now-converted ancient barn, and the humble maligned mole, all
of whom come together and demand to know: Who Are You Calling Vermin? 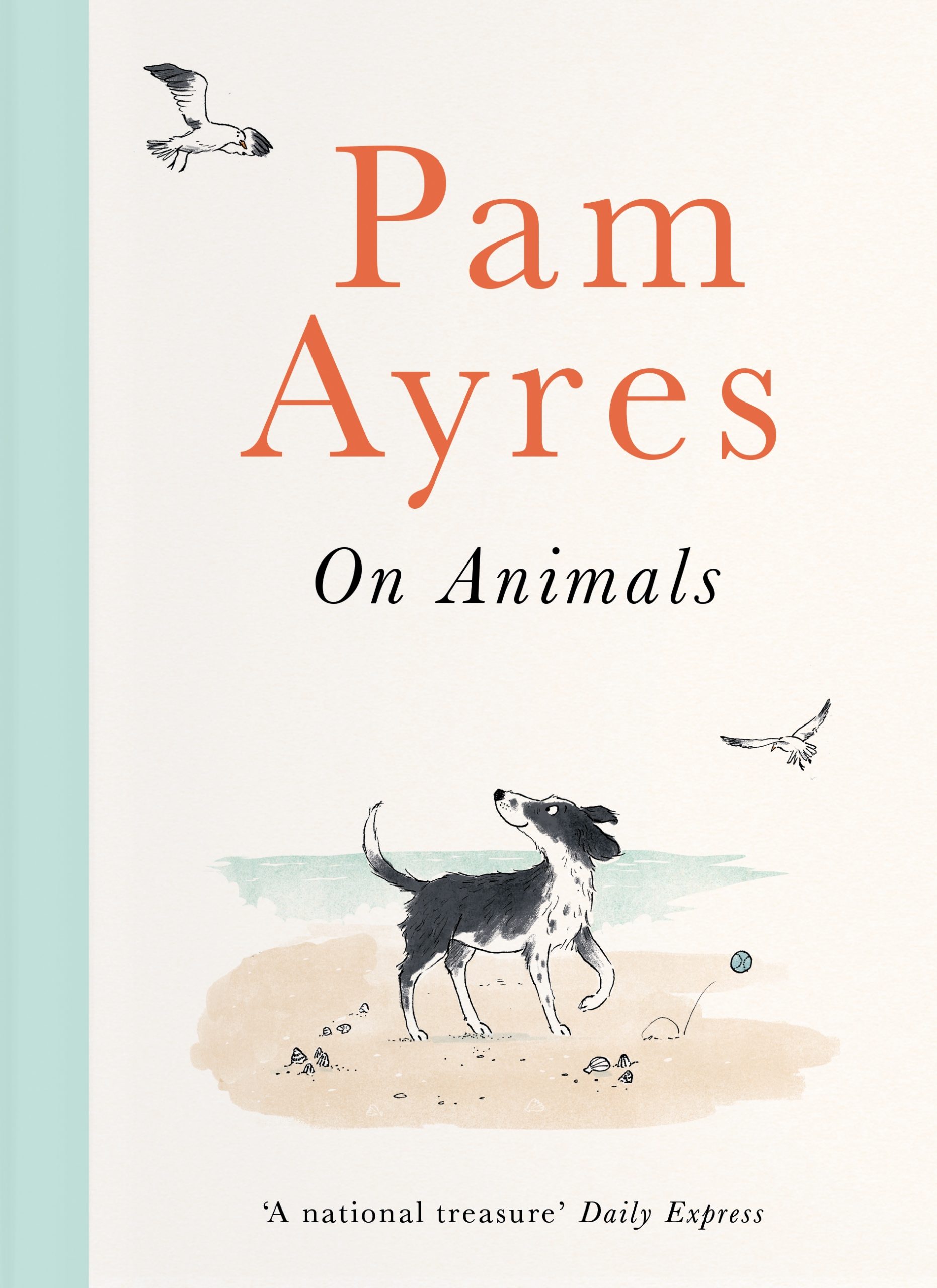 Published by Ebury Press in 2021 in Hardback

From her very first encounter with a friendly golden Labrador at just three years old, Pam Ayres has been enchanted by animals. She has owned sheep, and hens and naughty puppies, and fallen in love with British wildlife from our hedgehogs to our bees.  Now, for the first time, in this beautiful new illustrated work, she has collated her life’s work of poems, new and old, dedicated to her love of all animals. This definitive collection brings to life the charming characters and voices of all creatures great and small through Pam’s poetry over the last five decades. Including old favourites such as ‘I’m a Starling Me Darling’ and ‘Ode to a Jack Russell’, and new works written just for this collection such as ‘My Sister’s Cat Does Not Like Me’, this collection is perfect for all animal lovers. 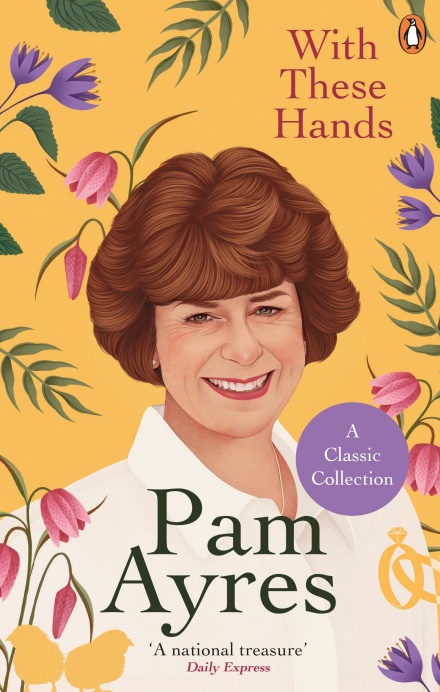 Delighting her fans for more than four decades with her mischievous wit and wry observations, this is a classic collection of poems and monologues from Pam Ayres, which takes us back to where it all began. From the nostalgia of her 1950’s childhood, conjuring up images of hand-knitted swimming costumes and suet puddings, through Pam’s four years in the WRAF where she discovered the joy of performing, to poignant reflections on motherhood and watching her children grow up. With These Hands provides a profound and hilarious insight into the joys and tribulations of daily life, as recorded by the nation’s favourite poet. 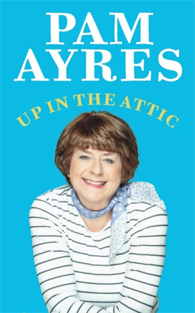 Up in the attic

With the same magic that has enchanted her fans for more than four decades, Pam’s new collection is by turns hilarious, reflective and profound. From the dubious joy of being an exhausted, panic-stricken hostess in ‘The Dinner Party’ or feelings of unease about pub tableware in ‘Don’t Put My Dinner on the Slate!’, to a poignant reflection of war in ‘Down the Line’ and the bittersweet nostalgia of ‘Up in the Attic’, this new collection will tickle and move readers in equal measure.

Published initially in hardback in September 2019, the paperback version will be published in August 2020. 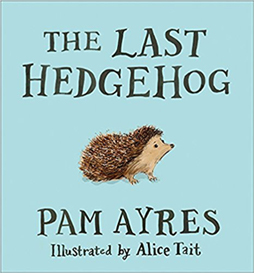 To mark and celebrate National Hedgehog Awareness Week, Pam Ayres has written a less-than-fond farewell from the perspective of the ‘last hedgehog left on earth’ – a delightful, hilarious and thought-provoking elegy to that most beloved inhabitant of the British countryside, the common hedgehog. 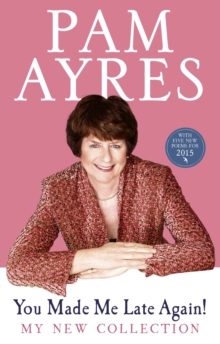 You Made Me Late Again!

With over fifty new poems from Britain’s favourite poet, You Made Me Late Again! is an essential addition to Pam Ayres’ incomparable collection of works. Pam’s poems are observant, witty and poignant in equal measure.

In `The Swifts’ and `The Pyracantha Anthem’ she marvels at nature, while `A Patient’s Prayer’ and `Litter Moron’ offer wry views on Modern Britain.

From the dog being afraid of the toaster to your son leaving home for university; and from the search for that perfect swimsuit to becoming a gran for the first time – Pam’s poems are beautifully crafted, and her subjects the everyday and the universal. Delightfully illustrated, most of the poems in You Made Me Late Again! are brand new, yet it also features several firm favourites from her stage shows, published for the first time, such as `The Make-up Lady’ and `Tippy Tappy Feet’. 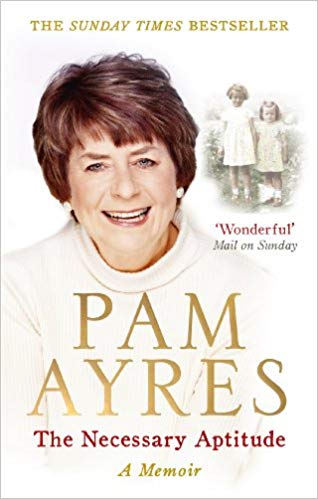 The Necessary Aptitude: A Memoir

Pam Ayres’ early childhood in Stanford in the Vale was idyllic in many ways, and typical of that experienced by a great swathe of children born in rural areas in the immediate post-war years. Though her parents’ generation was harrowed by war, better times were coming. Everything the family needed was within walking distance in the village, and life with four older brothers and a sister in their crowded council house was exceedingly lively.

In her late teens, Pam grew dissatisfied with her life as a Civil Service clerk with only the local ‘hop’ for scintillating excitement. Having seen three of her brothers called up for National Service and sent off to exciting destinations, Pam felt desperate for travel and adventure. She joined the WRAF and soon found herself in the Far East. There she began to write in earnest, and develop the unique talent that would make her one of Britain’s favourite comics… 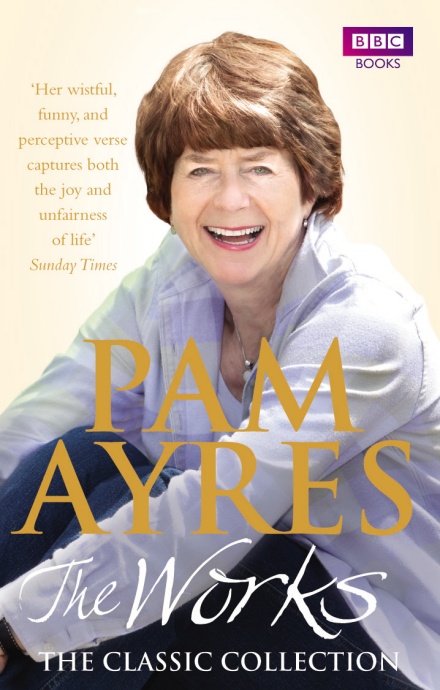 The Works: The Classic Collection

The Works contains 120 of Pam Ayres’ best-known poems, including ‘The Battery Hen’, ‘Please Will You Take Your Children Home Before I Do Them In?’, ‘Sling Another Chair Leg on the Fire, Mother’ and, of course, ‘Oh, I Wish I’d Looked After Me Teeth’. This edition includes a general introduction by Pam, as well as individual introductions to these classic poems of the seventies and eighties, many of which are now illustrated with specially commissioned line drawings by Susan Hellard. 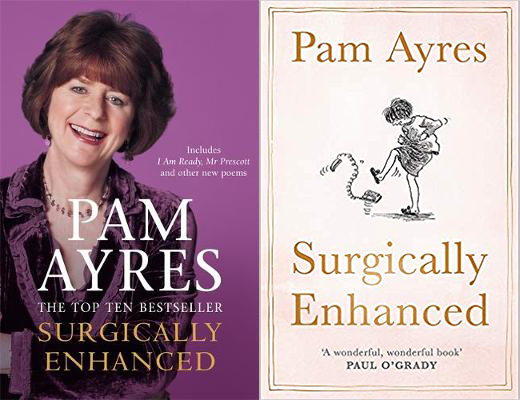 This new collection is a must-have for Pam’s many fans – and for anyone who enjoys beautifully crafted stories and poems to make you laugh and make you think.

Pam Ayres is one of our most widely-adored poets throughout the world and is nothing less than a national treasure. Her work is popular with fans of all ages, and her wry observations on the peculiarities of modern life will raise a smile from even the most hardened cynic. 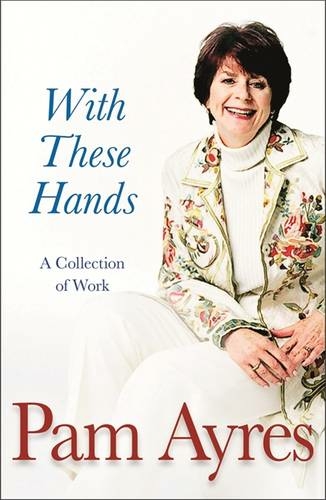 With These Hands: A Collection Of Work

A collection of the very best poems and sketches from one of Britain’s best loved entertainers.

WITH THESE HANDS is a collection of witty monologues and poems from Pam’s early life in the 1950s, through four years in the WRAF, and marriage and motherhood, to her present busy career as a writer and broadcaster.

The pieces are presented together with delightful illustrations by Susan Hellard providing the reader with a beguiling insight into the heart and mind of Pam Ayres.

Pam Ayres Presents - Down the Line

After a forty plus years’ career, and ten years on since Pam Ayres’ last live recordings were released, Pam’s latest audiobook brings together two recent live recordings of her solo stage shows, one at London’s Cadogan Hall, and the other at the Regent Centre, Christchurch. Pam introduces each recording and then, as a bonus, reads many of her poems which have not been previously recorded from her two most recent books, You Made Me Late Again and Up In The Attic.

With poems such as My Mother Was Right About You, Geriatric Juliet, Poor Old Father Christmas, and The Hat From Hell, blending Pam’s characteristically sharp wit with her warm, comic observations on everyday life, this hilariously funny collection is a must-have for seasoned fans and first time listeners alike. It also includes some of Pam’s more reflective poems including the title poem, Down the Line, which she wrote for the 100th Anniversary of the end of the First World War.

“I keep smiling, remembering moments performed by the incredible Pam Ayres at the Curve Theatre Leicester last night. Laughed and cried in equal measure. What a woman.” BBC Radio, September 2018. 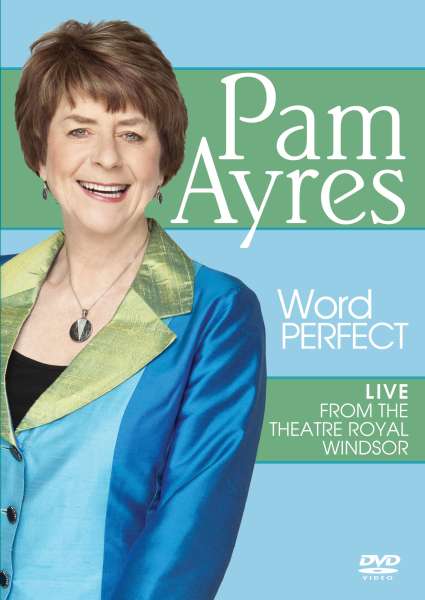 Pam Ayres has been entertaining audiences around the world for over 35 years. Her books, record albums, CDs, and DVDs have sold in millions, and Pam’s latest solo theatre show illustrates why she is one of the UK’s most popular live performers, selling out theatres wherever she performs.

This new recording is a mix of brand new poems and monologues, and some classic pieces never previously available on DVD. 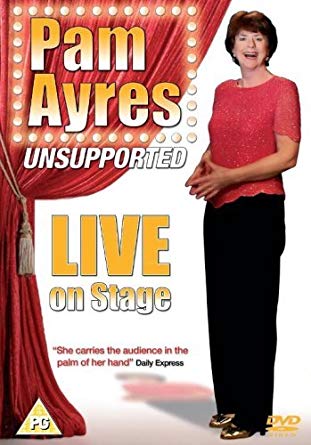 Recorded live at the Stables Theatre, Milton Keynes in June 2007, Pam performs her comic poetry, stories, and observations on life. This one woman live stage show includes a mix of brand new poems and monologues, and some classic pieces including the ‘The Wonderbra’, ‘Sexy at Sixty’, ‘I’m Ready Mr Prescott’, and the brand new ‘Pension Poem’. 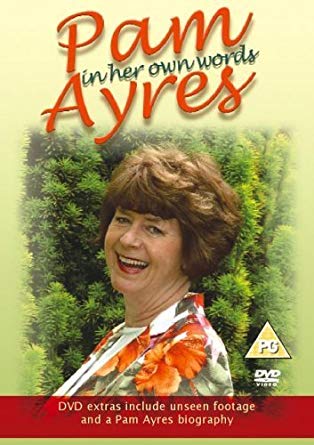 Pam Ayres: In Her Own Words

Pam Ayres celebrates 30 years in show business with her one-woman show which was recorded live at the Everyman Theatre in Cheltenham in 2005. Featuring a mix of new and classic poems and monologues, Pam’s unique style has made her a firm favourite with audiences both in the UK and throughout the world. Features the following monologues and poems: ‘Growing Up On Stanford-In-The-Vale’, ‘I Wish I’d Looked After My Teeth’, ‘Rugby Playing Son’, ‘How Can That Be My Baby’, ‘Big Eaters’, and many more.

Come and join Pam on her 2019 UK tour.  She will be introducing new poems as well as airing some old favourites, along with stories, jokes and anecdotes. 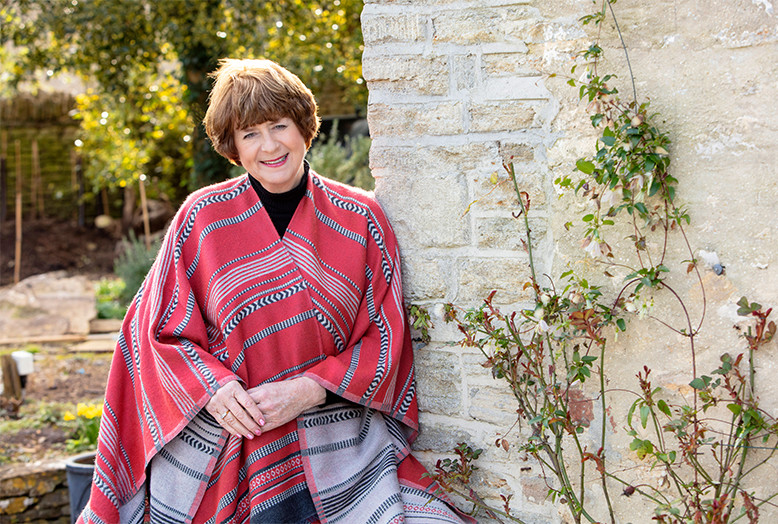 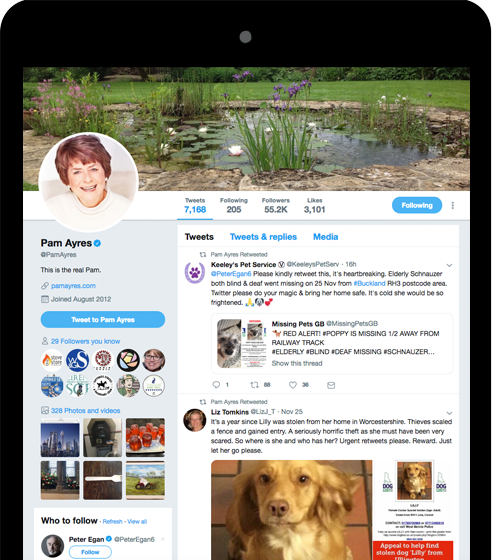